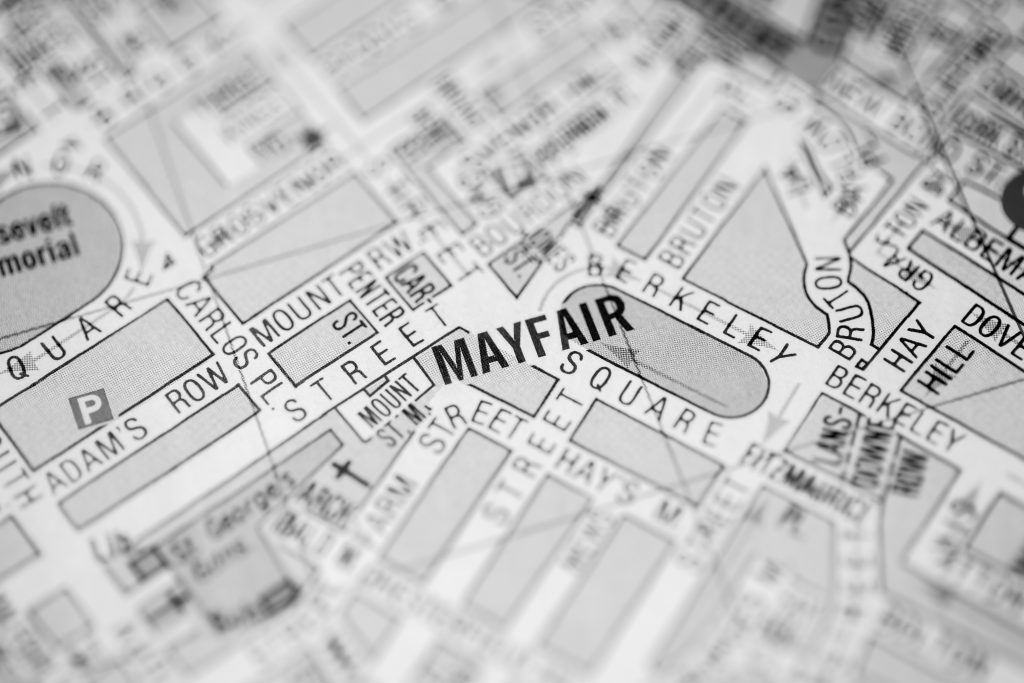 Predominantly focused on property management, our London team specialise in sales and lettings, land and relocation.

Although not open to the public, we are delighted to meet by prior appointment to discuss your property requirements face to face. Alternatively, please feel free to call one of our property specialists on 020 3883 4575.

As local property specialists, we love Mayfair, Marylebone and its surrounding area.

The Mayfair area is in the London Borough of Westminster and mainly consists of the historical estate of Grosvenor along with the estates of Albemarle, Berkeley, Burlington and Curzon. It is bordered on the west by Park Lane, north by Oxford Street, east by Regent Street and south by Piccadilly.  Beyond the bounding roads, to the north is Marylebone, to the east, Soho and to the southwest, Knightsbridge and Belgravia.

Mayfair is surrounded by parkland; both Hyde Park and Green Park run along its boundary. The 8-acre Grosvenor Square is roughly in the centre of Mayfair and is the centrepiece of the area, containing numerous expensive and desirable properties.

The area around Mayfair was originally part of the manor of Eia and remained largely rural in nature until the early 18th century. It became well known for the annual “May Fair” that took place from 1686 to 1764 in what is now Shepherd Market. The fair attracted an unpleasant, down market element and gradually became a public nuisance. The Grosvenor family, later to become the Dukes of Westminster, acquired land through marriage and began to develop on it under the direction of Thomas Barlow. The work included three major squares – Hanover Square, Berkeley Square and Grosvenor Square all of which were surrounded by luxury homes, and the church of St George Hanover Square.


By the end of the 18th century, most of Mayfair was built on with the prestigious housing to suit the upper class; unlike some nearby areas of London, it has never lost its affluent status. The decline of the British aristocracy in the early 20th century led to Mayfair becoming more commercial instead of residential, with many former homes converted into offices for major corporate headquarters, embassies and other businesses.

There remains a substantial quantity of luxury residential property, upmarket shops and restaurants, and modern hotels along Piccadilly and Park Lane in particular. Mayfair’s prestigious status has been commemorated by being the most expensive property square on the London Monopoly board.

Save your favourite properties to view later

Set alerts so you are the first to know

By continuing to use this website, we will assume you are happy to receive carefully selected cookies. Do you accept these cookies and the processing of personal data involved?