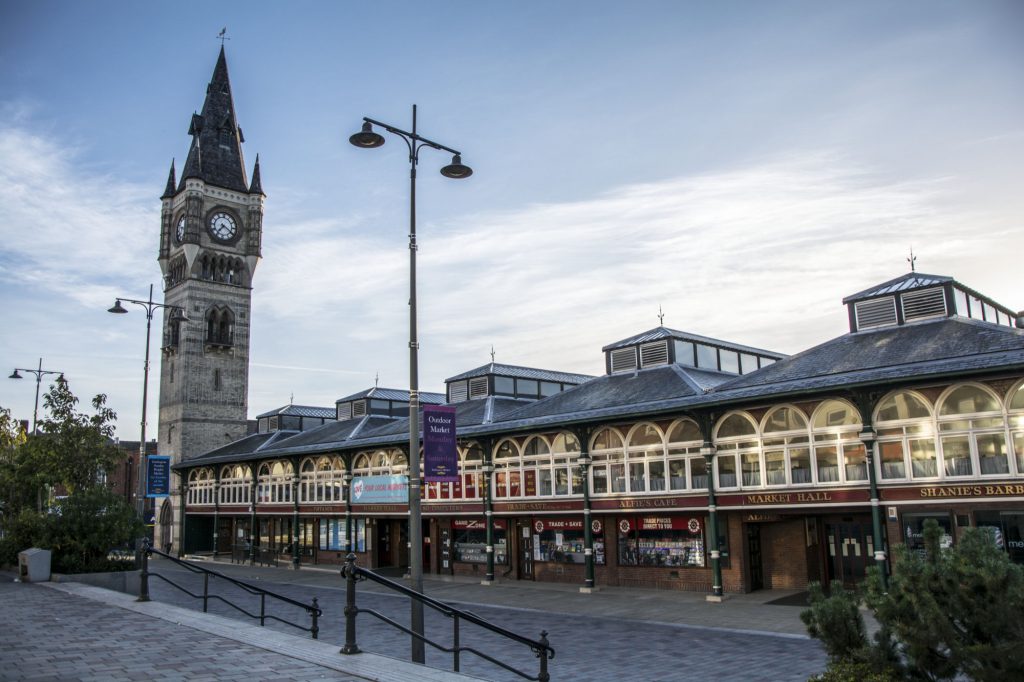 Traditionally, most estate agents in Darlington are situated on or around Duke Street. By not having expensive High Street offices, we don’t face the same costs for the upkeep and maintenance as well as the expensive rates. These savings can be invested in our staff and our systems and passed on to our customers without compromising service or expertise.

Whilst we are located in Central Park and on the edge of Eastbourne, we are within easy reach of Darlington’s West End and Blackwell, Harrowgate Hill, Harrowgate Village, Coatham Mundeville and Beaumont Hill, Whinfield and Haughton Le Skerne.

Darlington is a market town in County Durham, in the North East of England and is also part of the Tees Valley region. The town lies on the small River Skerne, a tributary of the River Tees, not far from the main river.

The town owes much of its development to the influence of local Quaker families during the Victorian era, and it is famous as the terminus of the world’s first passenger railway which ran between Stockton and Darlington in 1825. Darlington railway station is a stop on the East Coast Main Line which runs between London Kings Cross and Inverness.

The North East has a flourishing international reputation as a centre for innovation, science and design. A new generation of talented professionals is being drawn to the area, attracted by the high quality of life and the wide range of opportunities for personal growth and career progression.

The mobile phone operator EE is the largest private sector employers in the town, hiring 2,500 people. Another major employer in the area is the English division of the Student Loans Company, Student Finance England, who are based at Lingfield Point and employ over 1,000 people. Nevertheless, there are major engineering sites, with both Cleveland Bridge and the industrial arm of AMEC headquartered in the town. Another major firm within the engineering industry based in the town is Cummins which has a large scale engine building facility in the Morton Park area of Darlington. UK retail company Argos have their largest warehouse distribution centre in the North of England located in Darlington, within Faverdale Industrial Estate to the North West of the town.

Other large service sector companies with offices in the town include Darlington Building Society, Bannatyne Fitness Ltd and the national vehicle rental company Northgate, which is headquartered in the town; also within the Morton Park area.

As well as the large engineering sites based in the town, Darlington is also home to many businesses within the modern and developing industries including Information Technology. With large firms such as Infoserve Ltd having offices within the Morton Park area to the east of Darlington, located next to the A66 Darlington Eastern Bypass.
Close to the Darlington A66 Bypass is also the Link66 redevelopment scheme, which is a large plot of land close to the Morton Park site. It is hoped developers will see potential in the site due to its excellent transport links with fast access to the town centre and central park regeneration zone via the new Darlington Eastern Transport Corridor constructed in 2008. While also being in close proximity to the A1(M) Motorway which heads south to London and north to Edinburgh.

In March 2017, The Tees Valley Combined Authority (TVCA) and Darlington Council launched their £130m plan for the overhaul for Darlington Station.
This will enhance rail connections across the North, on the East Coast Main Line, as an integral part of the HS2 network, and across the Tees Valley.
Benefits of the plans are set to include, A £130 million boost to the economy annually, amounting to up to £1 billion overall, more than 3,000 direct and indirect jobs created, 98,500 square metres of commercial space, 1,500 new homes and shorter journey times to London, Edinburgh, Birmingham and Manchester.

A third of the North East is designated as an Area of Outstanding Natural Beauty or National Park and our natural environment is complemented by a rich history, with two World Heritage Sites and a wealth of castles, historic houses and gardens to discover.

Professionals relocating to the North East will be spoilt for choice when it comes to choosing a new home as each area has its own distinct character. The quality of the schools and healthcare are excellent and salaries are competitive too.

So whether you’re buying, selling, developing, relocating or building, why not speak to one of our property specialists today on 01325 776424.

Save your favourite properties to view later

Set alerts so you are the first to know

By continuing to use this website, we will assume you are happy to receive carefully selected cookies. Do you accept these cookies and the processing of personal data involved?